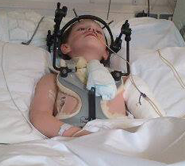 Joseph is a remarkable young boy, full of life, has a fantastic sense of humour, very happy and self-assured and has wisdom beyond his years.

Hard to believe that just over one year ago Joseph was fighting for his life having been knocked down on the Grosvenor road in west Belfast by a 4×4 vehicle. Joseph sustained multiple fractures to his neck, jaw, pelvis, ribs, legs and arms. He was rushed to the Royal Belfast Hospital for sick children and family were told to expect the worst, that they didn’t expect Joseph to make the night.

Simon his grandfather, tells me that these words along with images of arriving at the scene of the accident and hearing his daughters screams will haunt him for the rest of his life. Joseph was taken to theatre right away and had major surgery and remained in intensive care for two weeks heavily sedated, after they had fitted a halo device because his neck was broken. Simon describes the experience of Joseph first movement, Joseph’s mum had jokingly said “this will get him moving putting on the track of Justin Bieber’s Baby Baby whom Joseph detested and sure enough Joseph kicked his leg, this was the first time they felt hope, that what they were told was impossible could be possible.

It was soon after that Joseph opened his eyes this was to be the start of what was to be an amazing recovery.

Simon and Joseph’s mother never left Joseph’s side. Simon is in recovery from addiction over ten years and tells me that this was to be his greatest blessing, being able to be fully present and supportive to his family at a time of immense worry and uncertainty. He believes the strength was not of himself and held on to faith, a faith him and Joseph both continue to share.

Joseph continued to fight with every fibre of his body, surgeons were amazed at the bravery and determination Joseph displayed and described him as a miracle and a wee fighter. Joseph had many months of treatment and continued to be brave and in good spirits, never complaining and continued to get on with it. Joseph before long spent time in a specially adapted wheelchair. The support he received was wonderful, and Joseph touched the hearts of people all over the country, including his favourite football idols and received visits from Cliftonville players and personalised cards from Neil Lennon and the Celtic team.

Simon laughs as Joseph’s granda; “I’m receiving lots of attention too, even Joanne my daughter has had to remind me ‘Daddy this is about Joseph, not you’”

Talking to Simon about his journey in Joseph’s recovery I ask him what was one of the highlights and memorable moments, Simon tells me they both are passionate about football and he loved to share and read the football results together.

A day and moment he will never forget was when Joseph was invited as guest of honour at Solitude, home of Cliftonville football club, where they watched the match from the director’s box and Joseph met all the players. At the final whistle before being presented with the cup, they invited Joseph out on to the pitch and the crowd stated singing Joseph’s name. Simon said he couldn’t stop crying with joy and watching Joseph being given the cup to hold in the team photo, which was a moment he will treasure for the rest of his life, because this was against the odds, when doctors had thought that Joseph may never walk again.

Another memorable moment for all of us was when Joseph completed a sponsored walk for Davina’s Ark and pushed his own wheelchair over the finish line, for me and others he epitomizes what recovery is.

He is an inspiration, showing us the stamina of a human being, through the worst of adversity, hope ensured he kept going, never lost his sense of humour, he has so much gratitude, and is always thinking of others.

Joseph wanted to donate his Celtic shirt signed by all the players whilst he was seriously ill to Davina’s Ark to raise as much money as he can, and in his own words wanted to help others like his granddad.

Simon tells me there was so much healing in this journey not just for young Joseph but for himself, being around Joseph and his attitude and zest for life has enabled him to see and feel love at a depth never experienced before and but for his own recovery would never have experienced such a gift.

Joseph is ten years old and has endured more than many a person in a lifetime. He lives life to the fullest a day at a time, he’s been to the North Pole visiting Santa at Lapland he has also visited Medugorje in the summer. He is learning to swim and has joined a drama class, he cares for his mum and those around him, always being attentive and making them laugh, a comedian in the making!

Joseph asks that your support him in raising as much funds as he can for Davina’s Ark, a much needed service and reminds us that this isn’t just any Celtic shirt, its the shirt that beat the mighty Barcelona on Celtic’s 125th birthday, now how’s that for information!

Davina’s Ark is an organisation dedicated to the provision of a non-residential aftercare serviced for individuals recovering from addiction and their families as well as younger people aged 11 to 17.

Help and support is available at Davina’s Ark for the individual and family. You can contact us at info@davinasark.co.uk and 02830279407.